Image by Atim@Imaging and Keri Vibe

Jespa is one of those charries that just runs away from you. A strong mortal, she became much more than I started with. At first, she was just a tough city girl with attitude to burn. I tortured her as much as I could, but she wouldn’t lay down and take it. Then she added more abuse. She seemed to beg for it. What she really is and where she comes from was just as much of a shock to me as to you readers.

“Emerian brought the Vampire Novel back from the dead! Jespa will captivate you and leave you wanting more.” -C. E. Dorsett, author of Shine Like Thunder 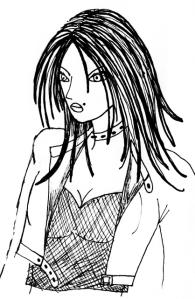 Jespa as a podnovel character gained her own fans with her kickass attitude, making her an icon in horror podcasting. She won the award for Podioracket champion by fan vote.

The very first author sketch- which didn’t really portray how I wanted her to be.

There is debate among readers as to who the woman on the front cover of Night’s Knight is. Is she the and sultry Severina or is she sexy Jespa? What do you think?